Update from the supreme court today on the appeal to stop the deployment of WIFI in schools in ISRAEL:

Making WIFI Kosher
It seams that in the last few days the department of education have published an update to its definition document about the deployment of WIFI in schools, saying that no WIFI will be installed in kindergartens and that kids in the first and second grade will be exposed to WIFI "only" 3 times a week, one hour each. In the third grade they will be exposed to WIFI radiation from 40 sources 4 times a week. From the forth grade the exposure will bot be limited.

This is new, in the last year WIFI routers have been installed in kindergartens. We got reports of photos of WIFI routers installed in kindergartens last year, like the photo below, and until not there was not limitation of the exposure in the first grades. This move of the ministry of education is not satisfying as we call for compete removal of WIFI in schools and band of using other wireless and cellular device in class. According to the ministries documents the use of cellphones should be band and limited but this is not being enforced. 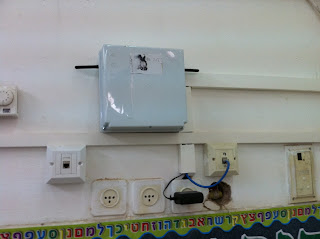 Recommending wired network - deploying WIFI
The ministry of education said again that wireless networks will be installed only in case that wired internet will not be "safe" to use. This is the same as they said 2 years ago and now 1300 schools out of 4000 have WIFI in them.

Court hearing on 18/07/2013
The court said that there is no presented data about how many schools were equipped with wireless computer networks and how many with wired.
The court said that there are EHS kids and ask the ministry of education what will be done in such a case of an EHS student (we filled about 10 affidavit of EHS people to the court, one of them is a mother to 2 EHS kids). The ministry of education lawyer said that the irradiation will be stopped in this case, but no such case is known to here or to the ministry stuff. A parent from the audience said "my kid is an EHS, she has headaches and sleeping problem since the WIFI was installed". The court noted that in the suite itself there are sensitive kids! 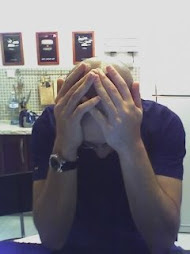