Members of the EU parliament recommend recognizing MCS and EHS 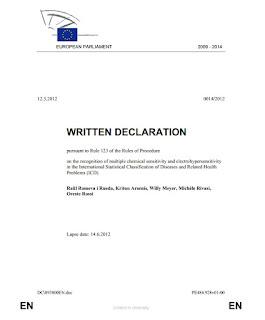 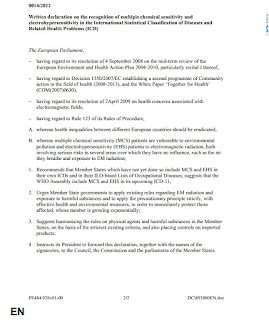 5 MEPs of the EU parliament issued a declaration that recommends recognizing MCS and EHS.Link to full papar: http://www.europarl.europa.eu/sides/getDoc.do?type=WDECL&reference=P7-DCL-2012-0014&format=PDF&language=EN

The Parliamentary Assembly of COE( Council Of Europe ) has already recommended to do so as part of it's resolution from 2011 ( http://assembly.coe.int/Mainf.asp?link=/Documents/AdoptedText/ta11/ERES1815.htm). This is the first time that members from the Parliament of EU issue a declaration just for this issue.

In order for this declaration to be accepted by the EU parliament, 370 additional members have to sign.

So if you have a EU citizenship this is the time to call or write you MEP and ask him to support the declaration.

Anyway, this is a step forward and it will bring hope for all EHS and MSC victims out there.

2. Urges Member State governments to apply existing rules regarding EM radiation and exposure to harmful substances and to apply the precautionary principle strictly, with effective health and environmental measures, in order to immediately protect those affected, whose number is growing exponentially;

3. Suggests harmonising the rules on physical agents and harmful substances in the Member States, on the basis of the strictest existing criteria, and also placing controls on imported products;

4. Instructs its President to forward this declaration, together with the names of the signatories, to the Council, the Commission and the parliaments of the Member States.