This is the translation to English of the letter sent by the deputy ministry of health (Rabi Yaakov Litzman  acting as the ministry head) to PM Gidon Sahar, the minister of education regarding the deployment of wireless internet (WIFI routers, laptops and tablets) in Israeli school today. In the letter the head of the Israeli ministry of health, Rabi Yaakov Litzman, Pm, deputy minister of Health, supports our side asking to rethink the all deployment process.

More about this at: http://www.timesofisrael.com/stop-wi-fi-in-schools-deputy-health-minister-implores/

The original letter is also below.

This is a great move forward.

I hope to deliver more good updates like the below (we still have a long way to go).

More info about our fight against the deployment of WIFI in Israeli schools from Dafan Tachover's blog:


From: The ministry of health, The deputy minister of Health (acting as the head of the ministry)

To my esteem honorable,
PM Gidon Sahar,
The minister of education.

Hello and greetings.
I received the copy of a letter sent by attorney Michael Bach, in which he specify the possible health risk associated with the deployment of wireless internet in schools.
I deeply sympathize with attorney Michael Bach’s letter. I had dealt with this subject in the past, and although I am not a professional, I  do fear that there will come a day that we will all cry because the irreversible damage that we, in our own hands cause the future generation.

Before any addition progress in this subject, the process has to be frozene and should be brought to comprehensive rethinking. 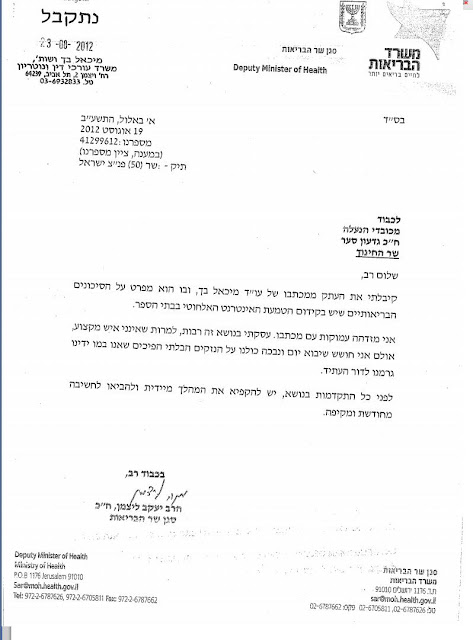