About 5 months ago we moved to a new house. The radiation levels here seemed to be even lower than the house I used to live in. RF bellow 0.0005mW/m2 and ELF-M bellow 1mG most of the time. And still since the move, I have been coping with headaches and symptoms when working in front of the PC in my working room. Every time I find and solve a new problem, I feel better. But then a new problem present itself, again and again.

I will try to describe the issues found and solved from today and back.

Today I solved (still need to see if I feel better in the next few days in order to be sure) a problem that caused my to feel sick with my stomach and to have brain fog after an house or two of working next to the PC (laptop with external keyboard and mouse, external screen, wired network) in my home office. The problem was that the laptop and the internet switch were too close to me. They were located on the floor next to my legs. Today I moved them to the other side of the room (as far away as possible from me) and also shortened and upgraded the network cable to CAT6. 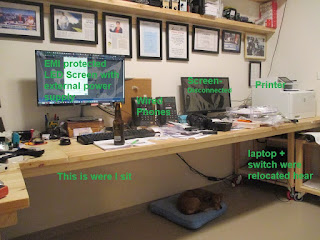 A week a go I manage to find the source to headaches that I used to get after an hour or two of working on the laptop. It was a small onwall 3 to 1 power socket.  It was located about 60cm from me. The measurement showed only small Electric field next to it. I decided to remove it as a part of trial and error. I was looking for the cause of these headaches few weeks now and since I could not find it with the meter, I started doing some changed by chance, once every day, until I removed the socket and felt better few minutes later. 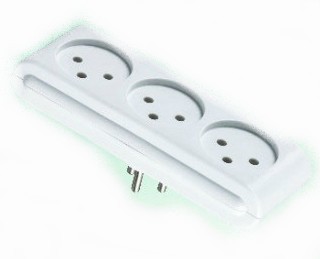 Two weeks ago, I finally solved (with the help of a professional electrician called Mani Segal)  a problem in the house electric grounding. The Neutral wire was connected to the ground wires and cause the currents I created in the house, to go on the ground wires to the neighbors.  I also learned that from all places I chose to sit above the ground wire. This lead me to change the sitting location inside the room and to relocate some of the equipment in the room. The fix of this issue was seen on the ELF magnetic measurements. Before the fix, If I was to turn ON an electric heavy duty appliance, say a oven, I was able to see a rise in the magnetic field as long as it was working.  No the rize is only for a small part of a second and then the field goes down again. This problem caused me to develop headaches 15-30 minutes of work in this room.  I knew about this problem before we moved, but I perspond the fix for weeks and months. 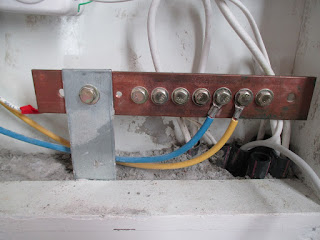 A month ago I installed (with the help of professional company called Dolev ) a ELF Magnetic field protection system on one of the walls of my home office. On the other side of this wall you can find the main electric cabinet of the house. The improvement after the fixed could be measured right away. The levels of ELF-M field were reduced (as long as no electric appliance was operating). As far as symptoms are concerned I felt an improvement, again as long as no electric appliance was turned ON.
For several days it seems that the symptoms become better but then I saw that not everyday, and not for all the day.
In this case as in others, I presponded the fix, until I was sure about it. 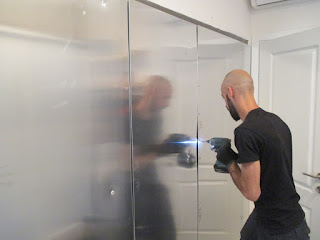 Few weeks back I relocated the laptop from on the table to bellow it. This trial and error move proved to improve the headaches I used to get after 10 minutes of work on the PC. 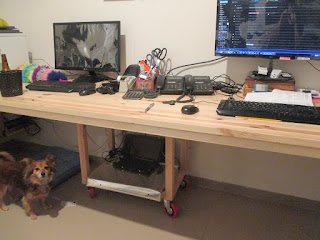 In few days I will completer the fix by installing a EMF protection wallpaper in order to absorb some of the reflections from the metallic ELF-Magnetic field protection.

Each and everyone of these steps was done while doing lots of measurements (before, during and after) of the radiation levels using my home use meters, and according to the knowledge and experience I gained while coping with EHS and while helping others.

In some cases I could not find the well power to do the fixes or steps. I was exhausted. But every time I tried to do small steps and eventually managed to completer and do major changes.

3. Don't give up. Try to change and improve.  Maybe the next step will help.
4. Keep it simple - as less as possible electric appliances and computer equipment next to you.
5. When you don't have a clue what is the cause of the symptoms , just pull out from the socket the electric and electronic devices , one at a time.
6. Mental coping - Every time there is a problem, the mind start to think that this is it. "for that problem there is not solution". "We will not find the problem, and will not be able to fixed it", " I am doomed", " I can't do it anymore...". The way to cope with that is by during all the measurements, test, tril and errors, fixed, all in small achievable steps. to remember that after solving the issue we will not remember the hard time and suffering, but only the fix. We need to forget the suffering. At first it is not easy, but then you get accustomed to it and it becomes your second nature.

I remind you that in this case all the problems were in the ELF fields from in house equipment and infrastructure. The house has no RF emitting devices in it, and the environment levels are mostly low.
Posted by Amir Borenstein at 12:01:00 PM