Dr. James Rubin is a psychologist who had done a series of studies on Electromagnetic Hyper Sensitivity (EHS). In his studies he concludes that EHS is a psychological condition. These studies were published as a proof that EHS is not real. Dr. James Rubin was promoted and continues to study EHS.  A few days ago I stumbled upon something that might prove his methods completely wrong. It seems that the device he used to simulate RF radiation, emitted also ELF, medium and high frequency EMR during the sham exposure. In addition from the videos it is cleared that the room where the testing was done are not shielded.
Please read on.

In all of his studies he reported that most people suffered from real symptoms when exposed to RF radiation. His studies show that people both in the "control" and "sensitive" groups reported headaches during RF exposure. He also reported that some of the people in the "Sensitive" group could not finish the series of tests and exposure because they felt too bad and could not comply with the test protocol. DR. James Rubin also explains EHS can’t be real since both the "control" and the "sensitive" groups could know that the RF signal was ON (more than 50:50). The fact is that the exposure to RF was for 50 minutes, I believe in such a long time, most people will feel something, even not sensitive people.

"Headache severity increased during exposure and decreased immediately afterwards. However, no strong evidence was found of any difference between the conditions in terms of symptom severity. Nor did evidence of any differential effect of condition between the two groups exist. The proportion of sensitive participants who believed a signal was present during GSM exposure (60%) was similar to the proportion who believed one was present during sham exposure (63%)."


The button line conclusion of all of his studies is that EHS people can't really tell when the RF signal is ON or OFF and that the cause for their condition is probably psychological.

"No evidence was found to indicate that people with self reported sensitivity to mobile phone signals are able to detect such signals or that they react to them with increased symptom severity. As sham exposure was sufficient to trigger severe symptoms in some participants, psychological factors may have an important role in causing this condition."

Hid studies were published and were pushed to the media (mostly by cellphone and wireless lobbies) as a proof that EHS is not real, and that all EHS people are actually suffering from psychological illness.

On the other hand his studies were attacked by independent scientists and EHS activists around the world who claimed these studies suffer from problematic logical design and methodological errors. Some even argued that these studies where designed to prove that EHS was a psychological problem.

A Big mistake
A few days ago I got 2 video clips of interviews with Dr. James Rubin in which he explains about the studies and shows the device that was used to radiate the subjects.

As a person that knows something about Electromagnetic radiation(EMR), has a lot of experience in measuring it and as an EHS person, I can say that this device emits Extreme Low Frequency(ELF) EMR and also some low and mid frequency EMR when the device is ON but does not transmit the RF signal (the "sham" exposure). Most of the severe EHS people are sensitive to most if not all EMR types and would be affected by wearing such a device on their head for about 50 minutes in each test round. I know I would. This has probably passed Dr. James Rubin's attention when he planned and ran the tests in the study. I am not sure that he understands this gigantic error even today. 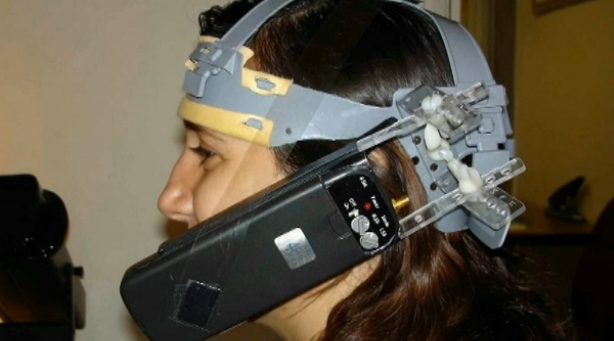 This device probably emits extreme low, mid and high frequency EMR even when it does not emit RF signal

If I am right, then this is just another example of unprofessional science work done by scientists who are studying EHS and who are very fast to give the verdict that EHS is a psychological condition but they don't understand enough in Electronics, EMR measurement, EMR source or even EHS which they study. Their studies are getting the headlines and are shortly becoming the tools of industry lobbies against EHS and EMR awareness activists, while they are not designed and planed correctly.


This is what I have written to the BBC:
"This message is about Paul Murphy report: http://www.bbc.co.uk/news/uk-england-lincolnshire-21386477
"Mobile mast 'allergy' woman moved to US for better health"

At 4:30 there is an interview with Dr. James Rubin who studies EHS and concluded that EHS is a psychological condition. In the interview it is shown that the rooms in which the study was done are not Electromagnetic radiation(EMR) shielded, and it seems that the device used to simulate the RF radiation exposure is a kind of a device that emits other types of EMR when in sham mode. In addition if you read the study you will probably see that only EHS people quit after exposure and the most people could tell when the RF signal was ON 60 to 63% (even normal people could feel the pain after 50 minutes of RF exposure).

All the above lead to the conclusion that the bottom line of Dr. James Rubin's study is wrong, and that RF exposure cause headaches after long exposure.


Thanks for your time.

Please see more recent review of this study at - http://norad4u.blogspot.com/2017/02/rubins-study-on-electromagnetic-hyper.html